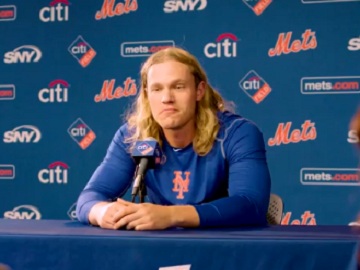 Citi continues its “If everyone said what they meant” ad campaign, promoting the Citi Double Cash Card, with a
new commercial, starring Noah Syndergaard.

The 30-second spot features the baseball pitcher for the New York Mets during a press conference, asking journalists, at the end, if they have any other questions. “Trying to bait you into a controversial response” – says a reporter to whom Syndergaard answers – in all honesty, obviously – “Deflecting with a joke”. “I’m gonna play favorites and call on Mrs. Met” – adds the pitcher nicknamed Thor referring to his team’s mascot, that starts laughing. Mr. Met, present at the event, as well, makes the “I’m Watching You” sign to Syndergaard.

The spot ends with the voiceover asking “Wouldn’t it be great if everyone said what they meant?” saying “The Citi Double Cash Card does” by mentioning that “it lets you earn double cash back with 1% when you buy and 1% as you pay”.