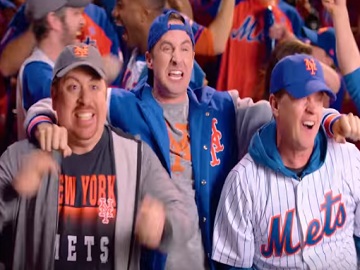 Citigroup has launched a new series of commercials to promote its Double Cash Card, that enables customers to earn double cash back when they buy and as they pay.

One of the 30-second spots, part of the “If everyone said what they meant” ad campaign, from lead agency Publicis Groupe, titled “Die Hard Fans”, stars stand-up comedian Jim Breuer as an impassioned New York Mets fan, watching a game and yelling. “Cliché advice from an unathletic fan!”, “Making up a stat so everyone thinks I know what I’m talking about.” – yells Breuer, who’s in the company of other “die hard” fans that are also expressing themselves as loud as possible. “Completely overreacting!” – shouts one of his friends.

When the crowd cheers, they all stand up and Breuer tells a player “Never doubted you!”. A third guy reveals that he has no idea what’s going on, but he still expresses joy and cheers along with the Mets fans.

“Wouldn’t it be great if everyone said what they meant?” – asks the voiceover at the end of the spot, mentioning that “The Citi Double Cash Card does” by letting you “earn double cash back with 1% when you buy and 1% as you pay”.