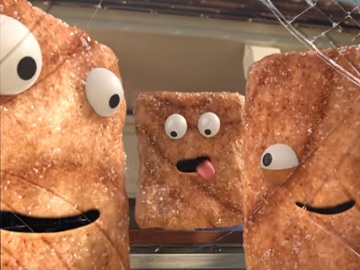 The 15-second spot, titled “Filter”, features three Cinnamon Toast Crunch Crazy Squares playing with filters on a smartphone. Amused by their “faces”, the Cinnamon square holding the phone drops it and its display breaks. This leads to another square tasting his “fellows” and then gobbling them down.

The spot ends with the voiceover saying “From our crazy delicious family to yours” and the campaign tagline, “Crave Those Crazy Squares”.