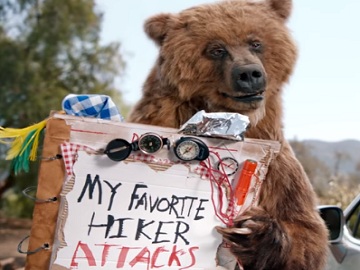 Chrysler has released a new commercial about entertaining your pals in a Chrysler Pacifica Plug-in Hybrid using the
Uconnect Theater as opposed to playing charades, which they’re terrible at.

The spot features the California state bear outside a Pacifica Plug-in Hybrid playing charade with his friends – a Desert tortoise, a California quail, and a rock. After failed attempts to guess from the guessers, the grizzly bear reveals it’s “cornucopia”. When the quail chatters that the game stinks, the bear says, looking at the camera, that “it’s not easy entertaining your pals” and revealing “there’s one way to amuse them without fail: Uconnect Theater”. “The Chrysler Pacifica Plug-In has it, Odyssey and Sienna don’t.” – the bird says, referring to the competition.

The commercial ends with the grizzly bear asking his friends if they want to do some scrapbooking after this, but the tortoise, with headphones on, obviously doesn’t want, as she is mesmerized by the possibilities Uconnect Theater offers. “That’s my stuff.” – she says, while the bear is holding a scrapbook titled “My favorite hiker attacks”. Finally, the latter and the other symbols of California state are seen near a Pacifica Plug-in Hybrid, which is presented as “the family vehicle for California”.