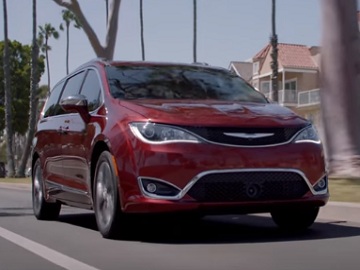 Chrysler highlights, in a series of new ads, that the all-new 2017 Chrysler Pacifica is now “the highest ranked minivan in initial quality” by J.D. Power.

The spots, showcasing some of the car’s safety features, technology and functionality, aim to show how people’s fortunes turned around after driving Pacifica. “We’re living the dream. But before Pacifica, life was no day at the beach. Sure, we’re basking in the sun now, but we had some dark days. Very dark days.” – says a young boy in the 30-second spot dubbed “Chrysler Pacifica Before Technology”, referring to scenes his older sister made as a preteen and as a teenager, such as refusing to get in the car and banging her head on rhythms of hard rock. “Thanks to our Pacifica, it’s all blue skies ahead.” – adds the boy, referring then to the colour of his mother’s face on her wedding day, after having spent too much time soaking the sun.

The ad spotlights the available UConnect Theater, which features dual 10.1-inch HD touchscreens with Blu-ray player, dual HDMI inputs, wireless headphones, Bluetooth remotes, downloadable games and apps, acting like a virtual babysitter, keeping the family entertained, and the 8.4-inch touchscreen, which enables you to get help from Siri Eyes Free, the iPhone mobile device digital assistant, to customize your home screen and more.

Chrysler Pacifica, named also a “Best Buy” in the Minivan Segment by Consumers Digest, the 2017 North American
Utility Vehicle of the Year, and the Best Family Minivan of 2017 by Parents and Edmunds, is the only minivan to receive the 2017 IIHS Top Safety Pick+ when equipped with the advanced SafetyTec package on the Limited Trim. Its MSRP is starting at $28.995.