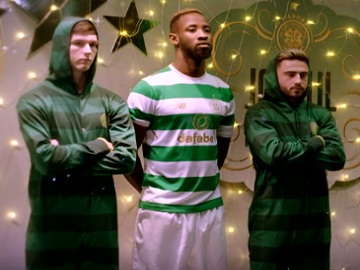 The spot features three generations of the Maguire family, all Celtic fans, traveling home to spend the holidays together. What they don’t notice during their journey is that Celtic stars are just a few feet away from them. Skipper Scott Brown and his team-mate Stuart Armstrong take on the role of a pilot and co-pilot, Player of the Year Scott Sinclair joins Brown’s cabin crew together with Celtic women’s team captain Kelly Clark and defender Mikael Lustig, who shows off (again) the dance moves that went viral last year, after being caught on camera in the Hoops gym. Manager Rodgers plays a bus driver, and the trio Moussa Dembele, Patrick Roberts and Kieran Tierney become mannequins at the Celtic Football Club Superstore, where the Magguires meet up.

When Maguire Senior asks a Parkhead steward to take a photo of him and his family, he realizes, just after the photo is taken, that it’s Craig Gordon himself.

The advert, also featuring a cameo from Bhoys icons John Clark and Danny McGrain, ends with the tagline “Joyful and Triumphant – Bringing the Faithful Home for 130 Years”.