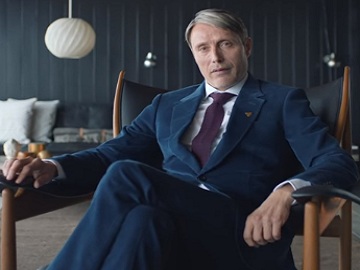 Mads Mikkelsen is communicating #TheDanishWay in the latest advert released by Carlsberg UK, part of the brand’s
“The Danish Way” campaign, showcasing also the new packaging design, which has at its heart the Dannebrog (the Danish national flag).

The spot features the “Casino Royale” actor sitting in a chair and putting aside a book he was flicking through in order to give some samples of communication “The Danish Way”. “We, Danes, don’t like to beat around the bush. We say ‘Less is more’. In fact, a wise Danish man once said… Nothing at all. Because wise men know that so much can be said with an expression like this.” – he says, giving then a series of looks aiming to convey the following: “The smoked hearing is particularly fine this time of year.”, “Sir! You seem to have a family of birds nesting in your beard.” and, finally, his “particular favorite”, “The usual, please!”, referring to a Carlsberg, obviously, which is immediately handed over to him on a tray.

“A better way to communicate?” – an onscreen line reads at the end of the spot. “Probably.” – Mikkelsen answers after sipping from his glass.

This campaign also includes a series of profiles of people living the Danish way, including master bread maker
Christoffer Hruskova, who creates simple, delicious Danish bread from under an arch in East London, and Rasmus Gjesing, the master craftsman behind the bicycles in the brand’s adverts.