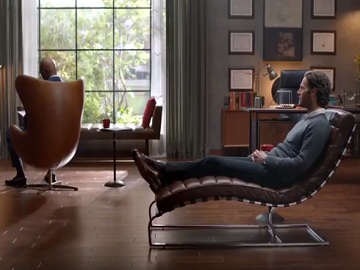 Capital One promotes the Capital One Quicksilver card in a hilarious new commercial, highlighting that you can earn unlimited 1.5% cashback on every purchase.

The 30-second spot features a man (played by Modern Family actor Tom Parker) at a psychiatrist, telling him that he followed his advice and that “it changed everything”. “You switched to the Capital One Quicksilver card.” – the doctor – who it turns out to be Samuel L. Jackson, says. “And how do you feel?” – he asks the patient, who sighs and answers that he feels like a burden has been lifted. “Those other cards made you sign up for bonus cash back. Then they changed categories on you every few months. Then you had to keep signing up. You deserve better.” – Jackson tells Parker, urging him to “get out there and keep earning that 1.5% cash back on every purchase, everywhere”.

On his way out, Parker thanks Jackson, who reveals he’s not a doctor and shuts quickly the door into his face.

After closing the door, he turns to the camera, adding the company’s tagline, “what’s in your wallet?”.