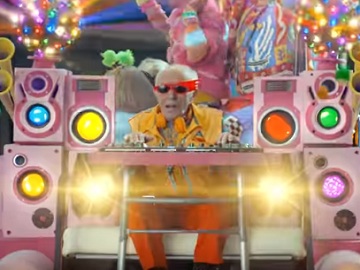 Candy Crush has launched a series of new ads to promote Candy Crush Saga, one of the most popular mobile games of all times, that turned five years old last month.

One of the 15-second spots features a woman in the departure lounge of an airport, asking another woman sitting nearby, if she knows “that feeling in Candy Crush when you beat a level and get a sugar crush”. She doesn’t know it, but soon after a bunch of people passing in front of them prove they do know it. Sporting colorful outfits and wigs, just like the candies in the puzzle video game, the party people are dancing in an electric shuttle to the rhythms of the 1978 hit song “You Make Me Feel (Mighty Real)”, chosen by a DJ, who seems to be in his 80s. Around them, wireless speakers with disco lights, disco balls and lots of colorful candies, are seen. “They get it.” – the woman says looking at them.

“Candy Crush. Play now!” – the voiceover says at the end of the spot, which also features the tagline “Get that
sweet feeling!”. Candy Crush Saga is completely free to play but some optional in-game items will require payment.
The song “You Make Me Feel (Mighty Real)”, written by James Wirrick and American disco/R&B singer Sylvester, was first recorded by Sylvester, but other musicians have recorded their own version. Among them there are British singer Jimmy Somerville, whose 1989 cover version peaked at #5 on the UK Singles Chart in January 1990, and actress-comedian Sandra Bernhard.