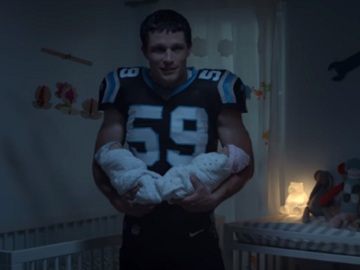 The 30-second spot, done by agency BBDO Worldwide, features a mother walking into the nursery at 3AM and finding the Carolina Panthers linebacker holding her two newborn babies. Seeing him dressed in his football gear, with her children in his arms, while her husband is sitting on a chair and eating, she – obviously – asks what’s going on.

Kuechly, who initially tells her to go back to sleep, explains that he’s giving her husband, Brian, the chance to refuel with the Chunky Maxx soup, which has 40% more meat, so he can do 40% more of the work around the house.

“It’s crazy!” – the young mother whispers. “Tell me about it. You have no idea how hard this is.” – Kuechly answers, referring to the watching over the kids and the 3AM feeding. When he sees the look on her face and Brian’s reaction, who’s shaking his head as a no, he tries to rectify his previous statement: “I’ve just been told that you may have some idea how hard this is”.

The spot ends with the voiceover saying the tagline “We’ll fill in. While you fill up”.