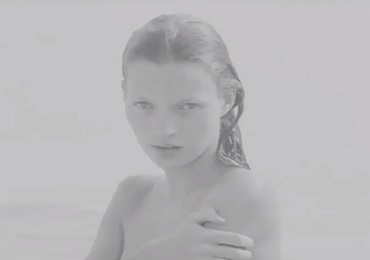 The black-and-white images, shot by Mario Sorrenti in 1993, in the British Virgin Islands, where the team camped out at a beachfront ruin for 10 days, feature the supermodel, then 18-years-old, dotted with freckles and sand, with her blonde hair racked with seawater, looking at the camera, while in the background Sorrenti’s voice can be heard, talking about her.

“She’s magical. She is definitely a magical person and at the time she didn’t even know it. And I would just say to her: You have such an incredible presence and power and beauty and I don’t think that became aware to her too much later.” – says Sorrenti.

The new Obsessed for Women, created by Raf Simons to pay tribute to the romance between Moss and Sorrenti, who were a couple back in the ’90s, will be launched on July 1.