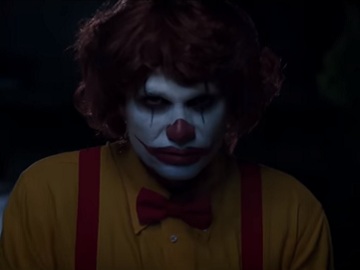 Burger King has released a clown-themed Halloween commercial, announcing that it will be offering a free WHOPPER Sandwich to the first 500 guests that come to select Burger King restaurants dressed as a clown, for their Scary Clown Night, on Tuesday, October 31st, from 7PM to close.

The spot begins with a teenage boy riding a bike through the streets at night. At some point, he finds himself followed by a clown who looks like a scary Ronald McDonald (the primary mascot of McDonald’s) riding a bike, as well, but a small one. In his attempt to run away, the kid starts speeding down the street, but more and more clowns, of all shapes and make-up, are following him. He sees a Burger King restaurant nearby and decides to go there, but the clowns keep chasing him. The commercial ends with the boy entering the fast-food restaurant and finding in the dark other clowns – some of them sitting at the table, some standing. “I want my WHOPPER!” – the Ronald McDonald-like clown says looking at the boy.

“Come as a clown, eat like a king.” – is the final onscreen line, followed by the name given to the Halloween night by the fast-food giant, “Scary Clown Night”.