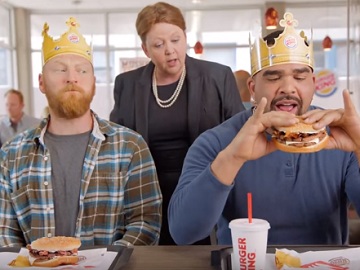 Burger King showcases its new Mushroom & Swiss King Sandwich, available for a limited time only at participating restaurants, in a series of new commercials, highlighting that “It’s as big as it is fancy”.

In one of the 15-second spots, two men with the golden Burger King crowns on their heads and holding the new sandwich in their hands are taught by a lady, during an “Etiquette Course”, how to eat a Mushroom & Swiss King Sandwich. They are shown following her instructions: “pinkies out, elbows off the table”, but without making it look like you’re flying. The course continues in another spot, where the two men and viewers get to learn more about how to eat the new Burger King sandwich: “no chomping” is allowed, but “a nice, elegant bite”. “Can you do elegant?” – asks one of the men to the other, while holding the sandwich with his pinky fingers raised. “No”, answers the latter.

The spot ends with the voiceover introducing the new Mushroom & Swiss King and listing the ingredients, namely
a half a pound of beef, sautéed mushrooms, and crispy bacon, and mentioning that “It’s as big as it is fancy”.