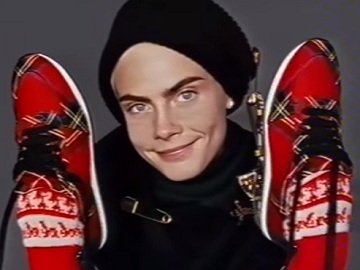 The 25-year-old English fashion model and actress sings, in front of actor Matt Smith, who’s co-starring, a few lyrics of the 1987 hit single “Always On My Mind” by Pet Shop Boys. The spot, filmed by photographer Alasdair McLellan, features the two talking to each other, smiling, and enjoying snowflakes, while wearing some of the pieces from the new collection, like a laminated trench coat, the Tartan Cotton Gabardine Car Coat ($2,195), the Crystal Daisy Chandelier Earring and Stud Set ($995), the The Burberry Bandana in Check Cashmere ($495), the Fair Isle Wool Cashmere Sweater ($795), cable knit cashmere blend beanies, knit fingerless gloves, and more.

The song playing in the ad is the dub version of “Always On My Mind” by Pet Shop Boys, song included on the band’s
third studio album, “Introspective”, released in 1988.