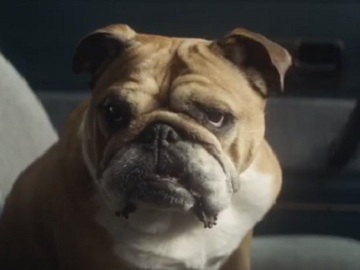 Bulldog Skincare has released a new advert, launching a new character, the “Telepathic Bulldog” that understands men and in on their side, regardless of what they need, be it advice on life’s most important issues or just a reminder to moisturize.

The spot, done by adam&eveDDB London and titled “Bank Robbery”, features Andy, a guy in an old camper van, together with his bulldog, getting ready to rob a bank on a busy street, in broad daylight, armed with a water pistol. His furry friend, who says he’s a “telepathic bulldog” and has just read his mind, reveals that he (Andy) is quite desperate to find money to go to his mates’ weddings, one of them being in Fiji. The dog tells him he could wear the same suit to all these events, and advises him to get some moisturizer. “When it’s the last time you shaved, anyway?” – he asks Andy, who starts looking at his face in the mirror.

The advert ends with the tagline “Bulldog understands men”.