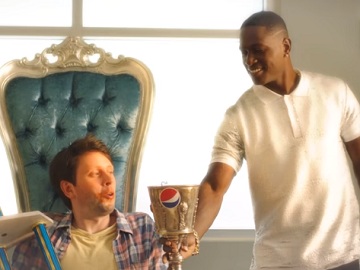 Antonio Brown stars in a new ad for Buffalo Wild Wings, which promotes the Pepsi Fantasy Draft Kit with a chance to host next year’s draft at NFL Headquarters.

The 15-second spot, dubbed “Fantasy-Fantasy”, features a guy sitting in a tufted chair, holding a tiered trophy, with his mouth dirty after eating wings with sauce, and sipping Pepsi from a chalice hold by Antonio Brown. Soon, it is revealed that he is at a Buffalo Wild Wings restaurant and he was actually daydreaming. After opening his eyes, though, he sees the Pittsburgh Steelers’ wide receiver, dressed in a white shirt, right next to him, urging him to make his draft pick. The football fan chooses, as expected, Antonio Brown.

“Get your Pepsi Fantasy Draft Kit & you could host next year’s draft at NFL Headquarters.” – the voiceover says at the end of the spot.