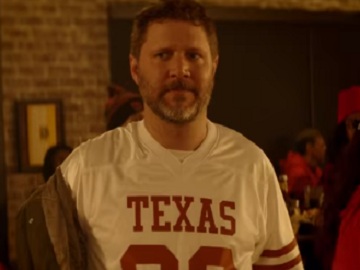 Buffalo Wild Wings highlights that we are all on the same team regardless of the football team we root for in its Christmas commercial.

The 90-second spot, titled “Stranded”, begins with a man in a motel telling his young son during a videocall that he cannot return home in time for Christmas because all flights have been cancelled due to the snowy weather.

Willing to watch his favorite team, Texas Longhorns, playing against Oklahoma Sooners and not being able to watch the game on TV, he gets his coat and faces the snow storm up to the Buffalo Wild Wing restaurant he had seen through the window. There, he reveals to be the only Texas fan, all the others being Oklahoma fans, which makes him get scared a little bit when a seemingly tough guy approaches him. “Guess you got snowed in.” – the latter, arms crossed on his chest, tells him. Imagining he’s not welcomed there, the protagonist starts putting on his coat, ready to leave, but – to his surprise – he is invited to stay and watch the game.

The commercial, concluding with the onscreen lines “We root for different teams. But we’re on the same team.”, also celebrates the Buffalo Wild Wings’ status of proud sponsor of Oklahoma and Texas Athletics.