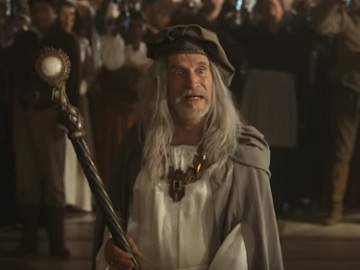 Bud Light has launched a new “Dilly Dilly” commercial, featuring this time a wizard at the court.

The 30-second spot opens with the wizard turning a chair into a Bud Light pack, which makes the King praise him, saying he’s a “true friend of the crown”. “Dilly, Dilly” – he adds raising a bottle of Bud Light in the air, and encouraging all those present at the event to do the same. The wizard asks the king what would he want him to do next and, to his surprise, the Majesty’s request involves only the transformation of all objects around into Bud Light. “You know, your Highness, I can do other things. I can put a curse on your enemies. I can make you immortal.” – the wizard tells the King, who sticks to his initial request. “Yeah, no, just the Bud Light thing.” – he answers, and then the crowd is heard shouting “Dilly Dilly” again.

The commercial ends with the voiceover saying, “Here’s to the friends you can always count on.”, the tagline of the brand’s “Famous Among Friends” campaign.

This is the fourth installment in the series of ads incorporating the catchphrase turned into a viral sensation, set to start rolling on TV on December 25.

After the first spot released by the beer giant, titled “Banquet”, people all over social media, including
sports fans, wedding guests, and even media, started using “Dilly Dilly” on their own, with signs on College Gameday, tweets, and on-air broadcast mentions. And that’s not all: Pittsburgh Steelers quarterback Ben Roethlisberger yelled “Dilly Dilly” ahead of the snap during the game against the Tennessee Titans, that took place on November 16.