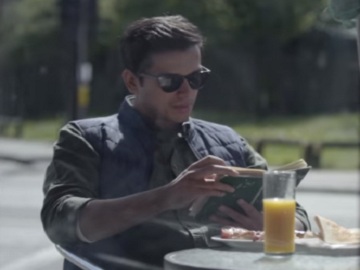 British Airways urges you to “Discover the London you don’t know” by booking your trip to London today. The airline has released a short film, featuring the journey of a young man from Chennai, India, to London, as he retraces his grandfather’s footsteps, creating eventually his own London story.

The video shows the protagonist finding in his old grandfather’s room the journal he kept in the 1950s, when he
lived in London, and the photographs taken there, capturing some of his adventures. “As I held his British Airways boarding pass, I could hear London calling”, says the young man, who’s then shown on a British Airways plane, with his “thatha’s” journal as his companion, ready for the trip.

The ad continues with excerpts from the old man’s journal, revealing information about London and British culture, in general. “London is music to a young man’s soul”, “Traditional British food is very different. They love their pies, puddings and pasties. The waiters have a formal air. And the taste is simply… mmm”, “Everybody is sharply dressed here.”, “London’s statues are remarkable. I wonder how they look so lifelike.” – are some of the memories left by the guy’s grandfather.

Before ending his trip to London, the protagonist goes to visit Harry, an old friend of his grandpa, who unravels the mystery about their private jet they have a photo with: it is actually an old British Airways plane. The gentleman gives him the pen his grandfather had used to write his journal, which he uses, at his turn, to write down his impressions. “In retracing my thatha’s footsteps, I discovered his London and mine. And so begins… my story.” – writes the young man, going back home.

The ad ends with the onscreen line “Discover the London you don’t know”.