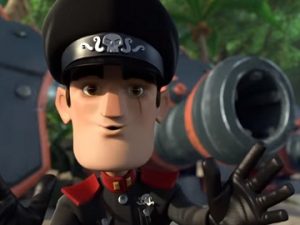 The epic combat strategy game Boom Beach, where you must use brains and brawn to defeat the evil Blackguard, enables players to build evil bases using the Base Builder, because “these evil bases won’t build themselves”.

In the 60-second spot released to promote the new feature, titled “It’s lonely at the top”, the evil Lieutenant Hammerman (the commander of the Blackguard) complains, through a song, that it’s lonely building bases all by himself and that he would need “a friend or two” to help him. He also reveals the idea he’s got: to open a Base Builder that will be called “The Blackguard Base Builder”.
The full song is here below:

I love building Blackguard bases. So why do I feel so sad?
What if I told you, the business of evil is lonely?
What if I said, a friend or two wouldn’t hurt?
What if I asked you to build a few bases here with me?
Tell me, would you? Or is no use?
Wait! I know just what I’ll do!
I’ll open my Base builder! The Blackguard Base builder!
Where my new best friends can build enemy bases however they want.
With top tier weapons lining their lots.
To carry out the most evil of plots.
I have zero friends, but soon I’ll have lots.
I’ll be the most popular evil villain on Boom Beach!

Blackguard is a military force aiming to take over the islands of the archipelago and enslave its inhabitants. Players must free enslaved islanders and create a task force to fight against the Blackguard and take it down.
Those who create a truly awe-inspiring evil base, might see it included in the game.