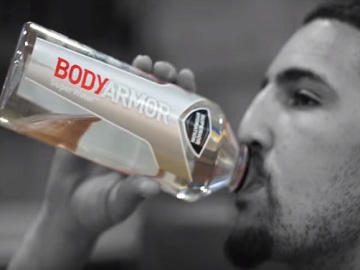 Klay Thompson reveals that he is “obsessed about bringing a title back to the Bay” in the latest installment for BODYARMOR’s “Obsession is Natural” ad campaign.

The Golden State Warriors’ player, who signed an endorsement deal with the sports drink brand in February 2015, is featured in the commercial training at the gym and revealing things people don’t know about him. “All that matter is movement”, “I focus on my forward”, “Push my defender”, “I’m obsessed about bringing a title back to the Bay” – are some of his lines, before he takes out a bottle of BODYARMOR and drinks from it.

The “Obsession is Natural” campaign, created by Kobe Bryant based on the idea that obsession is the one thing that “separates the bad from the good, the good from the great” and “the greats from the legends”, stars also Skylar Diggins, James Harden, Richard Sherman, Mike Trout, Anthony Rizzo, Andrew Luck, Dez Bryant, Kristaps Porzingis, and Dustin Johnson.

Thompson, who has released three major sneakers (the KT1, The KT Light, and the KT2) with the Chinese company Anta, with which he signed a sponsorship deal in 2014, launched late last week the KT2 “Chase”, coming in the shape of the KT2 with a high tongue that slopes down to a lower ankle and available in two colorways (white and gold for home games, and black and gold for when the Warriors are away). Unfortunately for him, these sneakers are not a success, being considered “aesthetically unappealing” and even “the ugliest effing things the world has ever seen”.