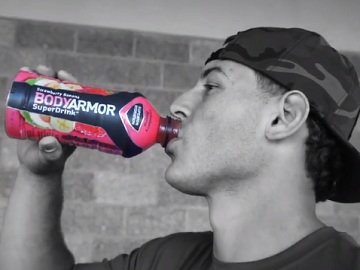 The 40-second spot, aiming to highlight, like all the other spots part of the campaign, that obsession is the only one thing that “separates the bad from the good”, “the good from the great” and “the greats from the legends”, features the baseball first baseman for the Chicago Cubs doing his workout routine and drinking, afterwards, BODYARMOR Super Drink with strawberry banana flavor. “Dedication, it never stops. We made history last year, took a while, but we got there. (…) All that matters now is what’s next. The next drill. The next workout. The challenge ahead. Every single day, over and over, again and again. Repetition, repetition, repetition – that’s where my focus is. I’m obsessed. It’s who I am.” – says Rizzo, mentioning that’s why he wins. “And whatever the next challenge is, I’ll overcome it.” – he says.

The Bodyarmor SuperDrink contains, according to the brand, natural flavors, such as Blackout Berry, Tropical Punch, Grape, Lemonade, Watermelon Strawberry, Orange Mango, natural sweeteners, and no colors from artificial sources.