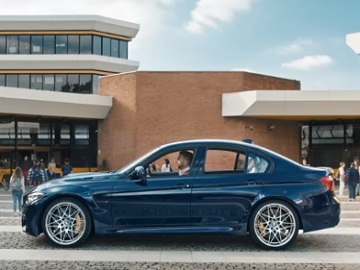 BMW promotes the BMW M division in a series of ads highlighting that, if you like cars that are too powerful, if you’re too ambitious about your driving skills and too nerdy when it comes to motor talk, then the all-new BMW-M.com is your place to be.

One of the 30-second spots, dubbed “Dad Gone Wild”, features a father at the wheel of a BMW M, waiting for his son to pick him up from school. When the boy arrives and tries to get in the backseat, the man starts the car and moves it ahead. When the boy is trying to go after it and get in the car, the man is backing up, annoying him, who gives him a meaningful look. Eventually, he manages to get in the car, while his dad carries a large smile on his face.
As he hits the road, the lines “Too immature”, “Too bold”, “Too slanted”, “Too powerful”, “Too wicked”, “Too much” appear on screen. At the end of the spot, a “M” formed by colorful BMW-M vehicles in a huge parking lot is shown and the dedicated website, bmw-m.com, is promoted, with the tagline “where too much is just right”.

Driven by motorsport, the BMW M automobiles feature powerful engines and an expressive design, exclusive
accessories and high functionality, letting you feel just how much passion lies in every single part of these high-performance automobiles.