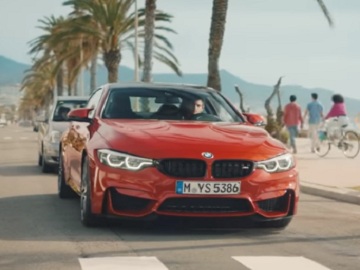 BMW-M continues its ad campaign, highlighting that the BMW-M is the place where TOO MUCH is just right, with a new ad.

The 30-second spot features a guy in a BMW M4 Coupe stopping at a crosswalk near an esplanade and looking at the people crossing. With the seat being “too low”, his visual field comprises the persons’ rears. As he’s looking at them, delighted by the curves he sees, realizes, after following with his eyes one of the girls, that it was actually a guy he was looking at, and gets perplexed.

The spot ends with the onscreen lines “Too low”, “Too bold”, “Too slanted”, “Too powerful”, “Two wicked”, “Too much”, and with the campaign tagline, “Where too much is just right”.