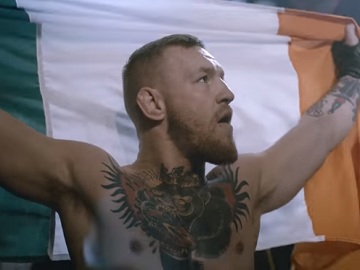 Betsafe has launched a new ad, starring Conor McGregor and titled “The Walk”, in order to illustrate the idea that “Passion Overcomes The Odds”.

The 60-second spot features the Irish fighter, who is the reigning champion in the UFC lightweight division, getting ready for a bout and walking toward the ring surrounded by his crew. “Everyone wants to be me. I defeat the odds through repetition, through pain and rejection. When I walk out, I am prepared. It doesn’t matter what you do or who you are. If your passion burns like fire, you will succeed.” – McGregor’s voice is heard saying, while on screen he is seen doing the walk carrying the Ireland flag on his shoulders.

Concluding with the tagline “Passion Overcomes The Odds”, the commercial is meant to encourage people to follow their passion and believe they will achieve their dreams against all odds. McGregor, who commenced a plumbing apprenticeship in 2006, when he moved to Lucan, Dublin, made his mixed martial arts debut in 2007, at the age of 18, and, the following year, had his first professional MMA bout, as a lightweight, defeating Gary Morris. In 2013, McGregor joined the UFC, becoming thus only the second Irish fighter to compete for the company.

Betsafe, that brings a collection of casino and poker games including Blackjack, Video Poker, Roulette and Baccarat, guarantees, according to its website, “a safe and reliable online betting experience”.