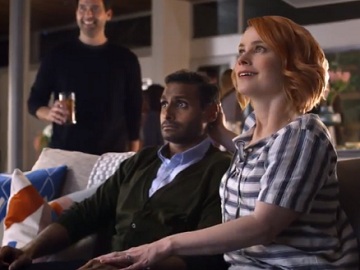 The 30-second spot, titled “Not Your Husband”, features Emma, a young woman who only has eyes for her TV since she upgraded to the fully immersive Sony BRAVIA OLED 4K TV. “It’s like she’s in her own blissful world.” – says the voiceover, mentioning that “that’s because a Best Buy blue shirt showed her the first TV that emits sound from the entire screen and with stunning OLED picture, it’s so captivating she’s not tuned into anything else”. In the meantime, Emma is shown sitting on the couch, watching captivated at the TV and running her fingers through a Indian guy’s hair sitting next to her.

“That’s not your husband, Emma. This is!” – says the voiceover at the end of the spot, while her husband is shown standing up and making fun of the situation.

The music playing in this ad is, as always, from the soundtrack of the film “Rocky”.