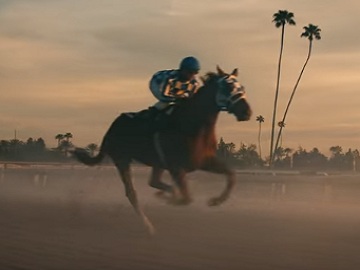 Audi showcases the 2018 Audi S5 Sportback in a new commercial, highlighting that this 4-door, 354-horsepower Audi has a “kindred spirit” in one of the greatest racehorses of all time, called “Secretariat”.

The 60-second spot starts with stock footage featuring Secretariat, an American Thoroughbred racehorse that lived from 1970 to 1989 and became, in 1973, the first Triple Crown winner in 25 years, and continues with another racehorse running on a track alongside the new S5 Sportback.

“What made Secretariat the greatest racehorse who ever lived? Of course he was strong, intelligent, explosive. But the true secret to his perfection was a heart, twice the size of an average horse.” – reveals the voiceover, whose “speech” is followed by the onscreen lines “The all-new, 354-hp Audi S5 Sportback is here” and “Progress is powered from within”.

In the List of the Top 100 U.S. Racehorses of the 20th Century, Secretariat is second only to a large chestnut colt named Man o’ War, with racing career between 1919 and 1920, who was given the nickname “Big Red”.

The Audi S5 Sportback features aluminum-optic mirror housings and accented body trim, S5 badges and available 19″ wheels by Audi Sport, plus available red brake calipers. According to the German automobile manufacturer, the all new design of the 2018 S5 Sportback adds, inside and out, “an athletic look to the iconic styling of the A5 range”, including a flat, flowing roof line with standard sunroof and luxurious materials that adorn the interior.