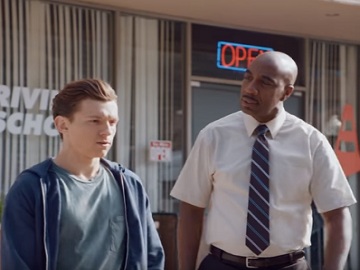 Audi showcases some of its vehicles’ high-tech advanced features and promotes the upcoming Spider-Man movie
in a new commercial starring Tom Holland (who plays Peter Parker) and J.B. Smoove (who plays a driver instructor).

The clip features Parker taking his driver’s test on his friend Tony Stark’s 2018 Audi A8, which proves to offer a thrilling experience on the road. Thanks to the vehicle’s Available Audi Pre Sense Plus, Parker manages to avoid a collision, thanks to the side assist system, which uses radar sensors and optical warnings to alert if a vehicle is in or approaching the car’s blind spot, and to the adaptive cruise control system, which can help stop or accelerate the car according to traffic conditions, he speeds down the road without using his hands and, eventually, performs a parallel parking manoeuvre without touching the wheel, because the car can park itself, making the instructor exclaim “I guess turning the wheel is too much for you kids nowadays, huh?”.

While the latter begins explaining that “it’s going be close” and listing the errors for which he takes points off, Parker stops a bank robbery by leaving the instructor talking to himself in the car, putting on his Spider-Man costume and immobilizing the criminals.