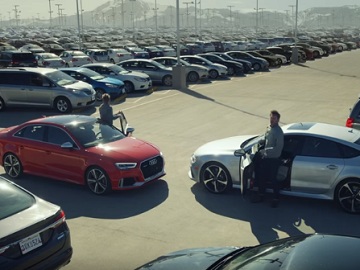 Audi has released its Christmas ad, reminding people that “It’s the most wonderful time of the year”.

The spot, created by Venables Bell & Partners, features two Audi Sport drivers on a trip to the mall ahead of Christmas. Before entering the parking lot, they look at the Santa ringing the bell in front of the mall and, judging by the look on their faces, they have a bad feeling of what’s to follow. Indeed, the two men find out there is only one spot left, so their positive mood gives room to a tensed attitude and the desire to have their car parked in that spot. As they start chasing for a place to leave the vehicle and go shopping as soon as possible, a choir of kids is heard singing a festive song.

During their attempt to win the race (because they’ve turned it into a race), there is also a considerable amount of false hope, with people making them believe they will free a spot and actually not doing that, which raises the tension and the suspense even more. Finally, the Audi owners seem to resort (apparently) to an “emergency” solution, that implies a stunt on a ramp.

The commercial ends with them entering the supermarket and, after bumping into each other again, spotting a stuffed giraffe toy that happens to be the last one on the shelf. After a few seconds of looking into each other’s eyes, they start running towards it and this is how the short film ends. “It’s the most wonderful time of the year.” – an onscreen line reads, as the song ends, as well, with the lyrics “Christmas is here”.