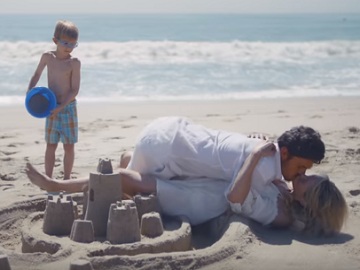 The 45-second spot, created by BBDO New York and directed by Zach Math from production company Caviar, features a couple passionately kissing on a beach and rolling, while embraced, over a kid’s sand castle. They keep making out, squeezing each other tightly in their arms, while carrying on a crosswalk, under a plane ready to take off, in the woods, in snowy mountains, underwater, among fishes, and then back on the beach, where they collide with another couple kissing like they do.

The telecommunications giant, urging you to “watch unlimited romance with Unlimited Data” and “Never pay overages”, highlights that, after 22GB of data usage, the speeds may be slowed, and that additional usage, speed & other restrictions apply.