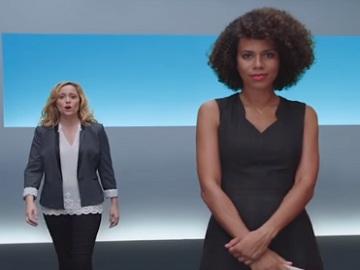 AT&T has released a new commercial to highlight that it has the Apple iPhone 8 and that its Unlimited Choice and Unlimited Plus plans include a free HBO subscription.

The spot, titled “More”, features the company’s spokespeople entering a studio and talking to the camera about the phone and about this offer, saying the word “More” a lot. “The amazing new iPhone 8 is at AT&T and we know you’ll love it. Because we know you want more. More great camera features and more power. And more than just some limited data, we give you unlimited plans with HBO included for life. Because you deserve more entertainment.” – the company’s spokespeople say as they come closer to the camera one by one.

The ad, also conveying the message that you deserve, besides more entertainment, “more spokespeople talking like this, saying the word ‘More’.”, features a hilarious ending: a spokesman says the closing line “It’s time for more” while standing too close to the camera. “Am I too close? I feel like I’m too close.” – he says, while his fellows give him meaningful looks and nod discretely in response to his question.

A week ago, AT&T promoted this free HBO subscription and invited viewers to get the new iPhone 8 in another ad, featuring a guy who gave an iPhone 8 to his girlfriend for their “34-day anniversary”.