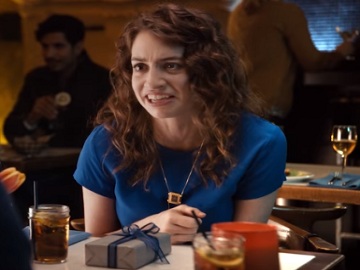 AT&T urges you, in one of its latest ads, to get the amazing new iPhone 8 with AT&T if you need an excuse to give a gift.

The 30-second spot, dubbed “Anniversary”, features a young couple on a date, at a restaurant. The guy (played by Mark Hildreth) pushes on the table, to his girlfriend (played by Beth Triffon), a gift, revealing that “it’s the new iPhone” for their anniversary. At this point, she gets confused, so he specifies it’s 34 days since they first met. The young woman answers she didn’t get him anything, but he isn’t disappointed because he got himself an iPhone, too, and considers it a gift from her for him. “I love it, that is very thoughtful of you. Thank you.” – he says, leaving his girlfriend speechless.

The commercial ends with the voiceover inviting you to “Get the amazing new iPhone 8 and with all AT&T Unlimited plans get HBO for life for less than $40 per line for 4 lines, only from AT&T”.