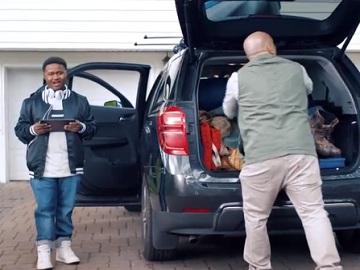 The 15-second spot, titled “Father and Son”, features a teenage boy near his father’s car, whose trunk is filled with lots of things, as if a road trip is planned, with a tablet in his hands, saying to the camera “We, the entertainment loving people, demand in-car WiFi. So we could stream our movies, games, and live shows”. As he ends the sentence, his father shows up and takes the tablet from him, getting then in the backseat of the car.

“What just happened?” – he asks finding himself with no tablet, near the car, with no driver. “You’re driving.” – informs him his dad, who already has the headphones on, ready to watch a movie.

The spot ends with the man urging his son to “man up” and with the onscreen line “Keep the backseat happy”.

AT&T, whose Connected Car solutions for existing vehicles include ZTE Mobley and Audiovox Car Connection 2.0., which work with most vehicles 1996 and newer with an OBD II port, offers in-car WiFi for $20/month.