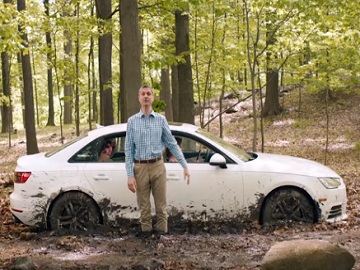 AT&T urges you, in its latest commercial, to keep the back seat happy with in-car WiFi from AT&T.

The 15-second spot features a man (husband and father) whose car got stuck in mud on a forest road, talking to the camera while slowly sinking into the mud, near the car. “We, the entertainment loving dads, who never passed up the opportunity for a shortcut, demand in-car WiFi. So they can binge-watch their favorite series and won’t rub it in my face while I try to get some help.” – says the man, referring to his twin daughters who’re watching cartoons on their tablets in the back seat and to his wife, who’s also watching something on a tablet, in the passenger’s seat.

The spot ends with the protagonist asking his “hun” what she is watching there and with the onscreen line “Keep the Back Seat Happy”. AT&T’s offer for in-car WiFi is $20/month. Its Connected Car solutions for existing vehicles include ZTE Mobley and Audiovox Car Connection 2.0., which work with most vehicles 1996 and newer with an OBD II port.