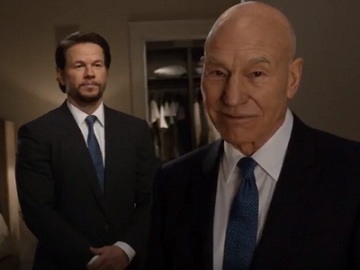 AT&T continues its ad campaign starring Mark Wahlberg with a new commercial, promoting its DIRECTV service, which provides users with HD, DVR and every box included for four rooms.

“We, the people, are tired of being surprised with extra monthly fees. We want HD and every box and DVR, all included. Because we don’t like surprises.” – states Mark Wahlberg in the 30-second spot, titled “Surprises”, buttoning his tuxedo in front of the mirror. The surprise is revealed later on, when Sir Patrick Stewart turns around as if he’s been looking in the respective mirror, as well, saying “Yes, like changing up the celebrity at the end to someone more handsome, talented.. and British”.

The spot ends with the voiceover urging viewers to switch from cable to DIRECTV and get four rooms with HD and DVR and every box included for $35/month (+ tax for two years).