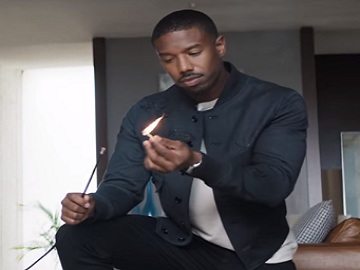 Michael B. Jordan puts a cable on fire in one of the latest AT&T ads, released to promote the company’s DIRECTV Now service.

The television and movie actor, known for series like The Wire, All My Children and Friday Night Lights, and films like That Awkward Moment, Creed, and Human Torch, is shown in a living room striking a match and make a fuse burn, while in the background dramatic music is playing. When the cable box is about to explode, a bomb squad man makes quite an entrance by tumbling through the glass window, ready to intervene. “Don’t we need that cable box to watch TV?” – he asks Jordan. “Nope.” – answers the latter, making the man ask “Don’t we need to run?”. “Nope.” – answers Jordan, adding that “It just explodes in a high-pitch Yaay”. Soon after, the cable box is exploding and the man gets out the same way he came in, leaving Jordan with his arms crossed, looking at the camera.

The spot ends with the onscreen lines “Get rid of cable. Stream live TV with no cable box”.