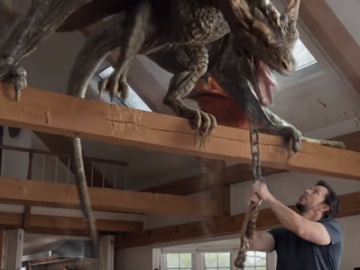 Mark Wahlberg returns to the small screen in a new commercial for AT&T, promoting the company’s DIRECTV NOW, allowing users to stream live TV in all their rooms without hardware or annual contracts, for just $10/month.

The 30-second spot, titled “All Our Rooms”, features the actor saying “We, the entertainment loving people, want our whole house to be filled with entertainment” while trying to tame a monster in a chain. “Well, we don’t want annual contracts hardware” – he says while walking into the kitchen, where a scene from a period drama is taking place and a woman is smashing something against the wall. “We just want stream live TV” – adds while drifting in the living room, with dozens of people looking at him. “And we want it for $10/month.” – concludes Wahlberg, who has a short conversation with the Lego Batman in which the latter says they are “two bros with sick houses”.

The spot ends with the voiceover mentioning that the AT&T’s DIRECTV NOW is a “big streaming deal” for $10/month (including 60+ live channels) and saying the campaign tagline, “It’s entertainment your way”. The company’s new streaming service is an add-on to its Unlimited Choice plan, which costs $60 per month and offers standard-def video and max speed of 3Mbps in addition to unlimited talk, text and data.

The AT&T campaign starring Wahlberg is created by BBDO and includes several spots that run across TV, print and digital, aiming to highlight that AT&T is not just a phone company, but “an entertainment company”.