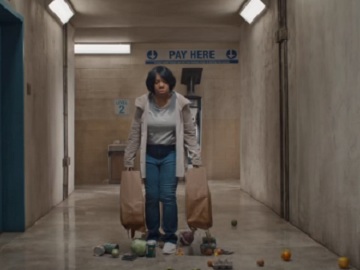 AT&T has released a new commercial to promote its DIRECTV service, which “has been rated #1 in customer satisfaction over cable for 17 years running”.

“DIRECTV has been rated #1 in customer satisfaction over cable for 17 years running. But some people still like cable.” – the voiceover says at the beginning of the 30-second spot, making then an analogy between liking cable and liking “wet grocery bags”, “getting a bad haircut”, “overcrowded trains”, “turnstiles that don’t turn”, and “spilling coffee” on oneself.

“But for everyone else, there’s DIRECTV.” – the voiceover adds at the end of the spot, urging viewers to switch to DIRECTV for a #1 rated customer satisfaction over cable and “this weekend only, get a $200 reward card”.