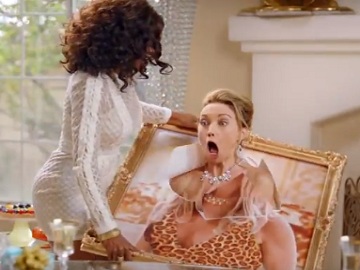 AT&T promotes its Unlimited Plus Plan, including now HBO, in a new commercial created by BBDO New York, urging you to “give in to your reality TV guilty pleasures with unlimited entertainment from AT&T”.

The 30-second spot, titled “Unlimited Reality TV”, features a group of ladies around a table at Samantha’s house, where a fight over “what happened in Cabo” degenerates into chaos, with them throwing things at each other. At first, one of them spills her drink on her “foe”, and the “war” ensues. Another one throws her red high heel into another one’s forehead, the hit one tries to hit another one with her dog before being taken down with a chair. A woman looking in shock at what happens around her soon finds herself with a picture smashed in her head and a man on his way down to the living room is about to get hit with a flower vase (and decides to turn back from where he came from).

Eventually, another lady comes with a sink to throw it to someone or something, breaking a glass table in the process.

The spot ends with the voiceover urging you to “Watch Unlimited Reality TV with Unlimited Data from AT&T” and
with the onscreen line informing that “After 22GB of data usage, AT&T may slow speeds”.