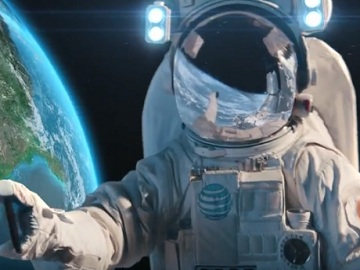 AT&T promotes AT&T AdWorks, described as “the nationwide leader in addressable TV advertising”, in a new commercial, highlighting that AdWorks can help advertisers reach the right audience and deliver a better ROI, now across screens.

“Imagine a world where you’re connected to your target audience at home or on-the-go across devices, maximizing
return on video advertising by serving ads to the right consumers, on the right screen, at the right time.

Delivering a brand message of scale across the nation with no waste, now at a device level.” – says the voiceover in the 30-second spot, mentioning that “This isn’t science fiction” and that is “AT&T AdWorks taking addressable advertising further than ever before”.

The spot ends with an astronaut with the AT&T logo on his spacesuit, into space, illustrating the idea of taking addressable advertising “further than ever before”, and with the voiceover welcoming viewers to “the point of more return”.