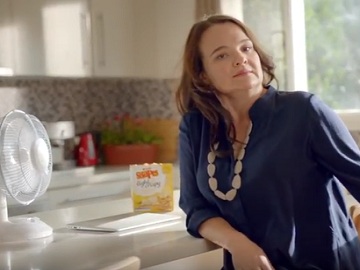 Arnott’s Shapes, the popular line of savory biscuits produced by Arnott’s in Australia, promotes its products in a hilarious new ad, featuring a brave mom.

The 15-second spot, titled “Audition”, features a woman singing in front of her laptop, with a fan blowing her hair, and a box of Arnott’s Shapes Light & Crispy near her laptop. When her young son shows up, with a box of Arnott’s Shapes in his hand, asking her if she’s making audition videos, she answers lies that she doesn’t, and asks him back “But why? Do you think I should?”. The boy’s reply is just a head shake to let her know that she should not make that kind of videos.

The commercial ends with the voiceover saying the brand’s tagline, “For whatever Shapes your family takes”.