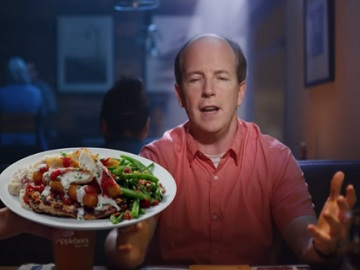 The 15-second spots feature a couple at an Applebee’s restaurant, looking through the menu. When the woman
asks “what are those different Topped and Loaded meals”, her husband makes various analogies so that she could have a clear image of what they mean. “It’s an American favorite on top of an American favorite, Alice. It’s like rodeos on top of rollercoasters.” – he says in one of the spots, dubbed “Rodeos and Rollercoasters”.

“It’s like Abe Lincoln on top of George Washington.”, “It’s like Labor Day weekend on top of 4th of July.” – he says in other spots, titled “Presidents” and “Holidays” respectively.

The Applebee’s Topped and Loaded entrees, starting at $10.99, are available for a limited time in select restaurants.