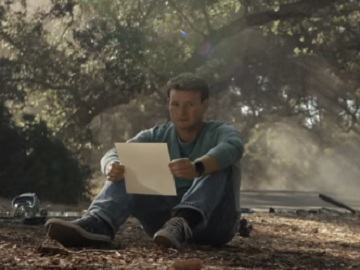 The spot, titled “Dear Apple”, includes letters written to Apple and CEO Tim Cook by a variety of people from all over the world and backgrounds: a man from Massachusetts, a country boy from small-town Mississippi, a ballet dancer, a Russian cyborg, a blind marathon runner, the father of a 9-year-old girl diagnosed with type 1 diabetes, a 99-year-old world traveler, to reveal how the Apple Watch has helped them change their lives or is helping them live healthier lives. One of them, who didn’t like being active as a kid, now wakes up at 5am to do his workout routine, another one says he strives every day to close his Activity rings, an old man reveals that his family thinks he’s crazy because he walks around the house, another says he ran a full marathon, another one says he can now check how his body is responding to rehearsals, a man who survived a car crash says his life was saved thanks to the SOS feature of the smartwatch, that enabled him to call 911, and more.

“Thank you so much for creating something that does not make me feel old.”, “After being rushed to the emergency room, I was diagnosed with a condition that was causing my liver, kidneys, and heart to start shutting down. Had I not worn by Apple watch, I never would have sought medical attention, which in turn saved my life.” – these are just some of the testimonials.

Marathoner Kara Goucher has a cameo appearance in the spot, reading, as well, her letter to Apple, in which she shared her story of moving past knee surgery.