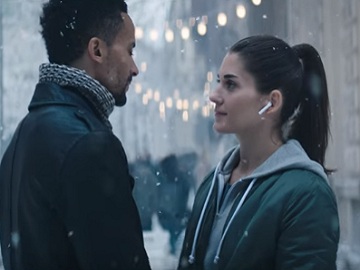 Apple showcases the new iPhone X and AirPods and introduces the tagline “move someone this holiday” in a new ad part of its Christmas campaign.

The film, titled “Sway” is set on a snowy day in a crowded city and tells a modern love story between a young woman who’s listening to Sam Smith’s “Palace” through her AirPods and a man she bumps into. After giving him one of her wireless AirPods, she begins a dancing journey through various places, with them swaying to the rhythms of the song.

Finally, when the magic is over, it is revealed that she actually didn’t give her AirPod to the stranger and that it was only a day-dream from her.

The spot, scheduled to make its TV debut on Thanksgiving during NFL football, was filmed in Prague and stars real-life couple Lauren Yatango-Grant and Christopher Grant, dancers from New York City who once met at an audition and got married.

The iPhone X is available for purchase for prices starting from $49.91/month with the iPhone Upgrade Program or from $999 from those willing to pay in full. The AirPods cost $159.