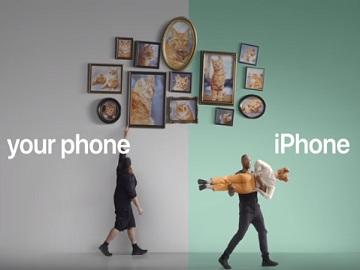 Apple has launched a new online campaign, titled “Why Switch”, including eight videos aiming to highlight that “Life’s easier when you switch to iPhone” and to metaphorically illustrate how easy it is to switch from an old smartphone to an iPhone.

The 15-second spots feature a split screen and music, photos and contacts being ported from one side (representing the old Android smartphone) to the other (representing the iPhone). One of the ads also highlight that “iPhone is designed to run fast” by showing a man who runs with an incredible speed, losing one shoe, when entering the iPhone side of the room.

The privacy issue is also approached in a spot featuring a man who has someone watching over his shoulder while he’s reading a newspaper and drinking his coffee and being by himself in the iPhone side.

“The Move to iOS app makes it simple to move your music, photos, and more to iPhone” – states the brand, urging viewers to go to the website and find out more about the switch.