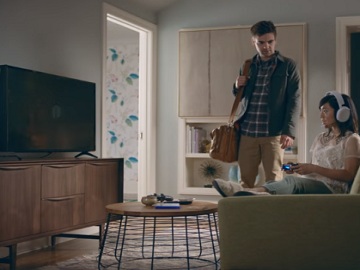 The spots aim to show that the new Ghost Skill brings your in-game Ghost companion to life and allows you to use voice commands to do a variety of actions, from managing weapons, to exploring the universe and connecting with friends, giving you thus the chance to play and interact with the Destiny 2 game (on Xbox One, PS4, or PC) in an exciting new way.

One of the spots, dubbed “Home Early”, features a young woman using Echo Dot while playing Destiny 2 to choose a new game mission. “Alexa, ask Ghost what mission I should play next.” – she asks Alexa and is immediately informed by Ghost that they have a knife waiting for them. At this point, her boyfriend shows up from work, asking her if she got in sick. “Ah, yeah.” – she answers, uttering then a short cough.

The commercial ends with the onscreen line “echo dot Connect with Destiny 2”.

The all-new Amazon Echo and Amazon Echo Dot are available for purchase for $99.99 and $49.99, respectively. The limited-edition Destiny 2 Ghost is set to be released on December 19, 2017.