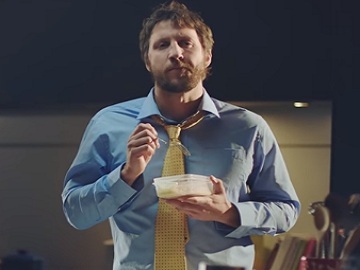 A hilarious new commercial introducing Alexa calling and messaging for Amazon Echo highlights that now you can
find out if you’re about to eat a delicious dinner or a scientific study.

The 15-second spot, titled “Larva Leftovers”, features a man in his kitchen, eating from a plastic casserole and asking Alexa to play messages for dad. When he hears his wife’s message for him, he instantly drops the fork and is about to vomit. Why? Because her message sounds like that: “Honey, there’s leftover risotto in the red dish. Just don’t touch Hannah’s larva experiment”.

Alexa’s voice calling feature can be used to call only persons that have Alexa devices or Alexa app (which is available for iOS and Android). The Echo Show will also be capable of doing video calls, which will work with the Alexa app, too.