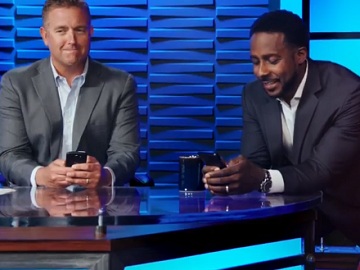 Allstate gives people the chance to win a trip to the College Football National Championship Game (scheduled to take place in Atlanta, GA on January 8, 2018) during its new #Sweepstakes campaign, launched on October 16th.

The insurance company has released a first spot, informing viewers that they should post something nice about their rival on social media, using the hashtags #sweettalk and #sweepstakes, for a chance to win the trip, which includes roundtrip coach-class air transportation, two nights standard hotel accommodations in Atlanta, GA, and two tickets (one for the winner and one for the winner’s guest) to the game.

The spot, titled “Sweet Stakes”, features Desmond Howard and Kirk Herbstreit in a TV studio, posting tweets on their Twitter accounts saying something nice about each other. Kirk Herbstreit, for instance, writes “@DesmondHoward, your famous trophy pose is my screen saver.” and adds the hashtags #sweettalk and #sweepstakes.

Howard, at his turn, writes a tweet, as well, saying something nice about the analyst for ESPN’s College GameDay. “@KirkHerbstreit’s best side is his left side. AND his right.” – communicates the former NFL player, who also adds the above mentioned hashtags.

The spot, featuring the two starting to laugh out loud after tweeting these messages, ends with the voiceover urging you to “Post something nice about your rival with #sweettalk #sweepstakes for a chance to win a trip to the College Football National Championship.