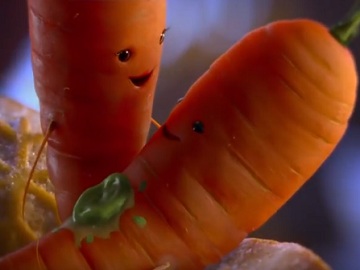 Aldi’s Kevin The Carrot is back for the supermarket chain’s 2017 Christmas campaign. This time, he finds his true one love, Katie, on Christmas Eve and embarks on a new amazing adventure across the dinner table to get to her.

The spot, narrated by award-winning actor Jim Broadbent, features the “Casanova” carrot, who fell in love with Katie at first sight, facing lots of obstacles to reach the middle of the table, where she sits on a tray. He manages to do that and save her from being hit by an airborne pea, throwing himself in front of her to catch the pea.

The ad also includes subtle nods towards blockbuster films, such as The BodyGuard and Titanic, with the two lovers reproducing the famous “I’m Flying” scene, where she spreads her arms into a wing-like position and he gently holds her at the waist.

Aldi’s spirited little root vegetable, starring in the Christmas campaign for the second year running, will be seen not only on TV, but also in cinemas and social media. He will also return on the shelves, as a plush toy (joined by Plush Katie the Carrot, this time), from 23rd November for £2.99 in support of Aldi’s charity partner, Teenage Cancer Trust.