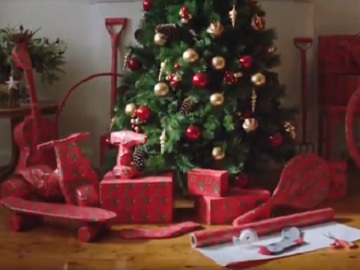 Aldi Australia continues its Christmas ad campaign with a series of new spots presenting some of the deals available on the Christmas range.

One of them, featuring a bunch of people waiting near a grill for lobster tails to be ready, highlights that lobster tails are only $29.99 at 2-pack. Another one, featuring a father taking all kind of things from the house, including a book, a flower pot, a bicycle, a pair of socks, a guitar, and others, to wrap them and give them as Christmas presents, highlights that 20m of jumbo wrap cost now only $3.99. Finally, a third 15-second spot highlights that a 150g pack of fudge can be now purchased for only $4.99.

The global discount supermarket chain launched its Christmas campaign in Australia, created by BMF Sydney and dubbed “The More The Merrier”, two weeks ago, celebrating an authentic Aussie legend, a batsman who, after 40 Christmases on which he bent his back for his moment of glory, decided to “get out” and treat himself with delicious meals, alongside the people who came to see him.